A review of My Only Ever Oedipal Complaint 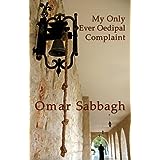 Reading Omar Sabbagh’s first poetry collection My Only Ever Oedipal Complaint is to identify with the persona of his poem “The Ancient Discoverer,” “All the senses take on luggage.” Sabbagh’s rich and innovative language, and experiments with form, bring about “A million vital things – about our / pettiness, our littleness, and the moneyed threats / we build out of nothing to satisfy the avarice / of our perversity” (23).There is also something both secular and spiritual in Sabbagh’s poems, such as in “Prayer with Dopamine Inhibited,” where life is “warm and curious / In the mealy marrow of us” (34).

Sabbagh moves comfortably through language and yet not always very comforting themes, issues, images. His poesis shows confidence, skill, mastery, but also playfulness. There is particular quality in the ways Sabbagh juxtaposes words in order to bring about new connotations, new meanings, new sensibility. He highlights his use of standard poetic devices. Alliteration and assonance, for instance,are sometimes used in unexpected places, and together with other poetic gestures produce a form of gracious awkwardness: “they cauterise my universe / like the surgeon’s mystical specimens / specified by tools” (42). This gives us the sense of love and what it is like, the feelings between parents and children, which are already so skilfully evoked in the title of the collection.This double sense of harmony and conflict between words that produces the sense of human relationships. There is a sense of penetration until“what is left is only a skeleton, a skinnier version / of our former belief in ourselves, but settled, rested” (23).

Most poems are dedicated to parents, friends, etc. The poems dedicated to Sabbagh’s father deal with love as poignant as the verses are sharp and controlled. Yet, a part of this love, and the complexity of Sabbagh’s work, resides exactly in those verses that seem out of control, and when the mastery of language, form, poeticity take a turn, and partly fail. The reader gets a sense that something raw and disturbing enters the picture.

This entry was posted in Book & Article Reviews and tagged Adnan Mahmutovic, My Only Ever Oedipal Complaint, Omar Sabbagh. Bookmark the permalink.

One response to “A review of My Only Ever Oedipal Complaint”