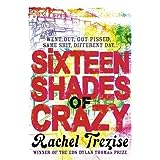 I was in the audience when an extract from the first chapter of Sixteen Shades of Crazy was read at the Green Man Festival. As a fan of Rachel Trezise’s’ writing, I’d waited for its release with curiosity. Her debut novel, In and Out of the Goldfish Bowl, was a triumph over the usual carbon-copied misery memoirs you’d find at Tesco. Within its pages, the pain of a neglected childhood in the Welsh Rhondda Valleys and spoilt innocence reduced to a spectre by passionate objectivity. Fresh Apples followed, setting the bar higher; leading many to question whether Sixteen Shades of Crazy could satisfy expectations.

Initially I was disappointed: the author’s skill for simile made the opening paragraph creak with self-consciousness. The opening suggests that Trezise was too focused on flaunting her writing skills; rather than allowing action to speak for itself,

They looked like any other group of twenty-and thirty-somethings, living the salad days of their lives, organs plump and red and juicy like the insides of ripe tomatoes, minds crisp like iceberg lettuce, sex powerful and biting like an onion. (p.1).

For some, such a criticism might seem finicky, perhaps perfectionist. After all, the similes are effective. But, in this case, the scrumptiousness of this description distracts from the dynamics of scene; with thoughts of salad, not character, remaining foremost in the mind. However, though this overwriting is often conspicuous, as the narrative builds up and such technicalities become irrelevant.

The descriptions of Aberalaw show the town to be somewhat hopeless. This is most acute when viewed through the eyes of Ellie, whose ambition to emigrate to the U.S.A and become a journalist is juxtaposed with a town whose long-gone prosperity is illustrated best by the statue of ‘Dai-capped Miner’,

The sun was reflecting on the bronze statue in the middle of Aberalaw Square. It was a Dai-capped miner, one arm clutching his Davy lamp, the other curved protectively around his wife and babe in arms. (p. 20).

From here the poignancy of Aberalaw unfolds. Ellie’s ‘friends’, Rhiannon, and Sian, become a vehicle for a polemic on how tragic and disturbing childhoods construct disturbed, fragile adults. However, the novel isn’t entirely bleak, there is plenty of humour to be had as well. None more so than in descriptions of Rhiannon,

‘Bloody tired I am,’ Rhiannon said. ‘Marc’s fault it is. Came home wanting six weeks’ worth of nooky in two days.’ Ellie cringed at the mention of nooky. Rhiannon was always fraught to portray herself as a hip, twenty year old fashion aficionado. She read articles in Kelly’s magazines about John Galliano and Stella McCartney, was always dripping in fake haute couture. But her vocabulary perpetually belied her disguise. Words like nooky and mush and Billy Whizz. Her voice came straight from the estate. (p.2).

With a mixture of seriousness and black humour, Sixteen Shades of Crazy lives up to the standards set by In and Out of the Goldfish Bowl; demonstrating how an outstanding debut doesn’t always result in an anti-climax.

Sixteen Shades of Crazy was published by Blue Door (April 2010).

One response to “Reading the Welsh landscape in Rachel Trezise”