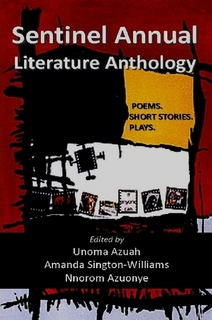 The Sentinel Annual Literature Anthology is a fantastic collection of writing that spans a variety of genres.  There are new poems, short stories and plays edited by Unoma Azuah, Amanda Sington-Williams, and Nnorom Azuonye. The contributors come from Hong Kong, Nigeria, the USA, Australia, the United Kingdom and other countries.

It makes for exciting reading as the issues tackled are from the everyday to the unusual and allow the reader much anticipation with the turning of each page. As Byron Beynon says (and this could sum up the whole collection), in his poem, ‘Sorbonne,’ it is:

Despite the differing subject matter of the stories and dramatic pieces, the theme of ‘freedom seeking’ in its many forms is prevalent.

Amanda Sington-Williams’ stunning story, ‘Escape’, keeps us gripped throughout. Will Hana make it over the border with her children? Even in the end, when you think that she might be safe, there are hints that the hardships ahead will be insurmountable.

In Jill Richter’s story ‘New World, New Home, New York’, you know that things are not going well when you read,

‘In mid-February a second body came hurtling past their window.’

The Chelsea Hotel is no longer the bohemian stronghold of a previous decade where all the hip people hung out but a fertile ground for pimps and drug dealers.

Michael Spring’s ‘Extras’ brings a touch of humour. Written in the first person and based on a film set where the main character is employed as an ‘extra’ — a peasant under attack.  Black humour is employed in phrases such as those spoken by the angry director;

‘I want to see you back here on the threshold of despair.’ And; ‘Does anyone else have a problem with being dead?’

Catherine Smith in ‘Looking Nice’ brilliantly encapsulates events in the lives of George and Mary, and, Emma and the student —just a few hours on either side of a wall and profound changes take place that allow the two women to find a new sense of self.

The dramatic scripts find a welcome place within the anthology. Nnorom Azuonye’s ‘Funeral of The Minstrel’ explores the world of the poet and academic Esiaba Irobi to whose memory the anthology is dedicated.

Finally, there is a sense of inclusion which reflects the generous scope of the anthology.  From Jane Moreton’s poem, ‘Vino Del Licor’;

‘We are made welcome./The sun works on the wine;/we have become their cousins for a time.’

Alison Lock is a poet and writer of short fiction. She has an MA in Literature Studies and her collection of poetry, ‘A Slither of Air’, is published by Indigo Dreams Publishing. Several of her stories have been published and in October 2011 she won both first and second prize in the Sentinel Literary Quarterly Competition.  She is presently working on a book of short stories to be published in 2013. For more information about her work go to www.alisonlock.com